Planting an image
This picture shows a newly planted tree on the sidewalk of Rainier Avenue. The reason why I took this picture is because it shows how this community cares about its appearance and wants the future to be as bright as the past.

Rainier Beach High School
This picture is of the sign outside of Rainier Beach high school. I took this picture because it shows the growth and progress that the school has made to improve its image.

Street Sign
This picture shows a sign that is in Rainier Beach that illustrates the town. It shows where the direction of Mapes walkway, the community center, and the library. This is artwork to me because it helps inform the people about their favorite whereabouts. It helps that it’s colorful too.

Big Time Mafia
This picture shows some graffiti on a railing outside of Safeway with the letters BTM on them. BTM stands for Big Time Mafia. This crew of hooligans from the ages 13-21 go around the city representing their crew to the max, although their reputation is bad they’re trying to express themselves. 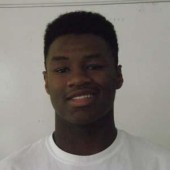 I'm Jequan Hayes. I'm a senior at Lindbergh High School. I love football. With Freedom Net i hope to get work experience while also having fun.